Beginning of an Eldar army

It's been slow progress with this army project and that's good since I don't want to rush things. I have gotten around to paint more Guardians and Warlock for a small Combat Patrol tournament held just this weekend. Here's a pic of what I have gotten painted so far. 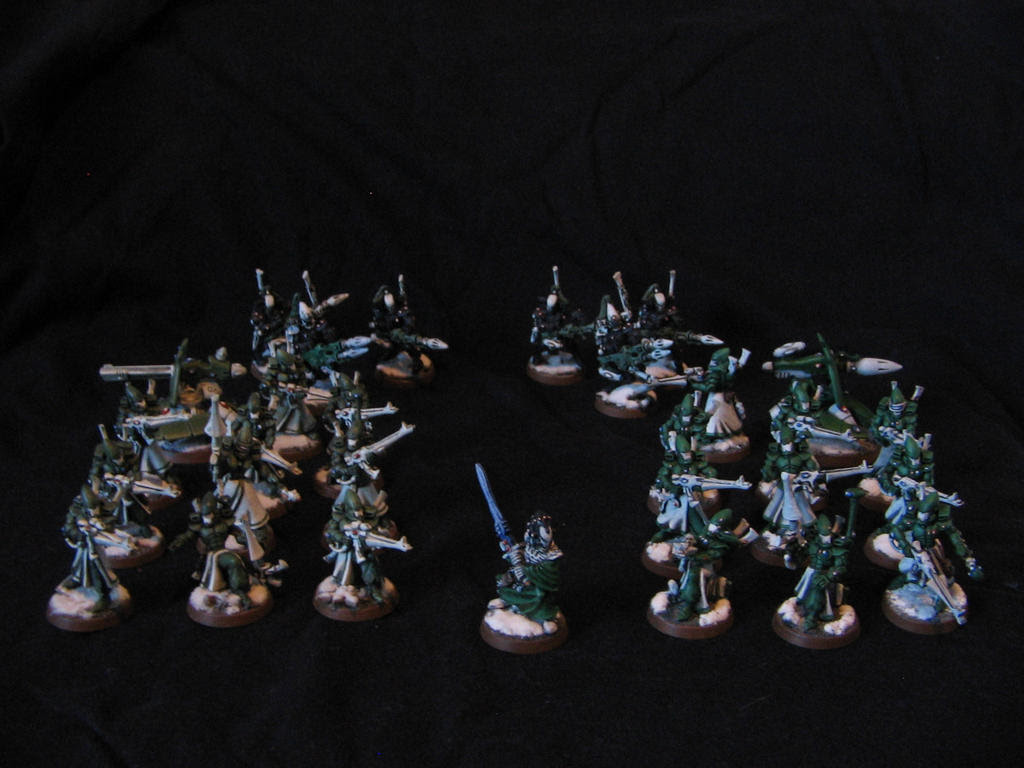 For the 500 point tournament I had 18 Defender Guardians with the Eldar Missile Launcher, Warlock and two units of 2 Dark Reapers and Exarch with Tempest Launcher.

This tournament included my first games with the Eldar army and it sure was fun. There was 6 rounds in the tournament. First game was against pretty nifty Ork army made from Kroots. The two Dark Reaper Tempest Launcher barrages proved to be awesome way to snipe the Warlord from the enemy, raining six blast in a turn on him, thanks to Fast Shot Exarch skill. I also had Night Vision on both of them, allowing me shoot freely at the enemy models in 5 of the 6 games played on that day. I won against the Orks as the mission was Purge the Alien.

Second game was against Space Wolves. I won that game as well, thanks to the Tempest ap3 stat. Mission had 3 Objectives to hold, I took two with one reaper unit and guardians. Both reapers rained death upon the marines as they struggled to take one of the objectives in open ground.

Third game was against a horde of Tyranids, with 18 Gargoyles, 20 Gaunts and couple of bigger monsters. The opposing player was, to my surprise a very beautiful woman, playing again after 10 years pause. The game only last 3 rounds and I won with very low casualties. Tyranids learned that charging a unit of 18 guardians is not the best idea thanks to Overwatch rule.

After that thighs went down hill as I got an another Eldar army against me with such unit choices as 6 jetbikes, spiders, 2 war walkers and a Shadow Weaver artillery. I lost that badly, mainly because of poor deployment area and even worse way of placing my units on the area given. Game was over in three turns.

The two last games where against Dark Eldar and I lost both of then mainly to those darn reaver jetbikes that  caused automatic hits and lot of them in one fly over.

But despite of the last 3 games I had fun playing "footdar" army in such low points game. The Guardians are excelent now with their new rules. To make my army 1000 points strong I will be adding a Farseer (doh), Dire Avengers, maybe a Wave Serpent and Swooping hawks. I also have 6 jetbikes under construction from the high Elf lions but those will take a bit more time. I would also like to convert a ten model strong Warp Spider unit.

I have decided to make an Exodite Eldar army. This idea of Eldars that long ago saw the doom of their race and left for the edges of their empire to get away from the Fall is fascinating  Since they mostly ended up on planets with harsh environments I tough of making a snow/winter themed army.

The backbone of my army would be the true underdogs of the current 40k edition, the Guardians. Mostly because they would be the main supply of fighters in Exodite worlds. My conversion plan is to kit-bash the Guardians, as well other warrior models that I'll be needing, with the Fantasy Battle High Elves archer models. I will give the legs from the archers for my exodites to give them a unique look over the normal Guardians. Here's the first try. 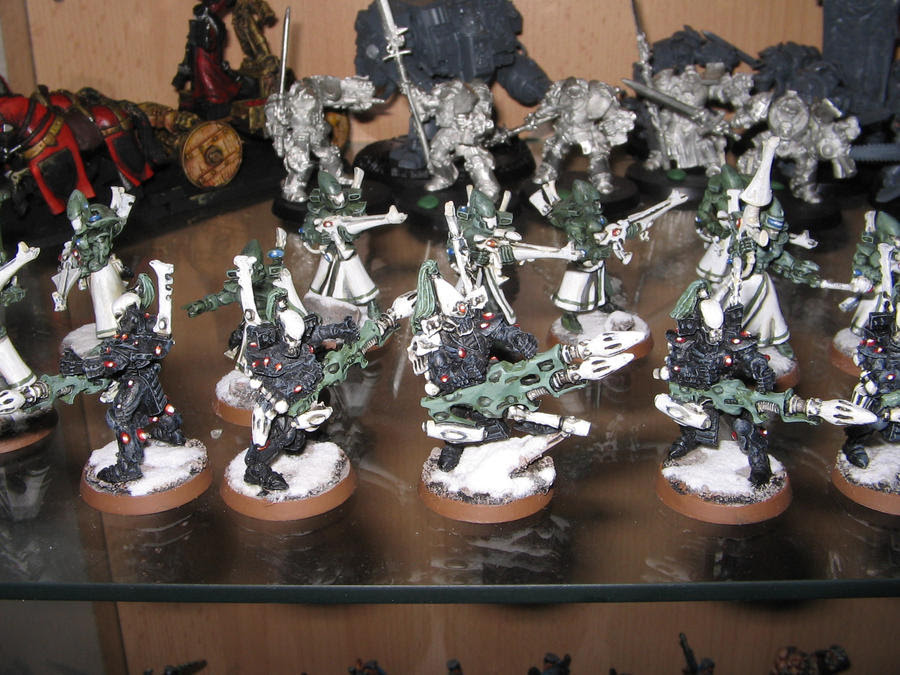 Sorry for the poor picture quality. The overall look of the both Guardians and the Dark Reapers where pretty good. The white is a color I struggle to get good enough but with practice I hope master it enough to give my models a look that they deserve. The archer legs look absolutely awesome on the guardians.

To continue this project I first looked at other similar exodite armies on the web and noticed that they like to use the Dark Elf Cold-ones and Lizardmen models a lot. To avoid this I tough of looking for monsters and mounts that would look like they could endure the harsh cold of an eternal winter. Even tough the new Fenrisian wolves models look pretty cool, I don't think they will suit the eldars. Maybe as an ally.

Jetbike units are the real issue when it becomes converting them from some kind of animal model. The lizard theme benefits largely from the new Dark Eldar Cold-ones, giving the players a look that enforces the idea of the model having toughness 4 and armor 3+. What other kind of model would do the same in the furry side of the models available to me? Well for one I do already have four models of the High Elf Chariot lions, they carry some kind of armor plating and seem sort of an animal that could survive in the cold thanks to it's fur. Also, they seem quite big as they need to present the same size of an jetbike. Only drawback is that even the animal seems very agile and quick to move it probably isn't as fast as a jetbike. But you have to make some compromise when making count-as models.

I will update this project as it goes along, 'till next time.

I really like the Imperial Guard as an army, the underdogs of the 40k universe, ready to take all manner of aliens, just 'cause. After my Mordian army project I wanted to do a "brighter" army, to counterweight the dark urban theme of the Mordians. Luckily I had bought around 60 or so Tanith models dirt cheap from a friend and I tough about making a desert army since the models suited that theme very nicely. Making this was real challenge and fun to put together, giving me tons of conversion possibilities since Tanith models only  had so few options with the special weapons troopers and especially with the heavy weapons.

Converting the Tanith models proved to be easy after hours of clipping off lasguns from other models. The Tanith female troopers were perfect for carrying special weapons, by removing their lasgun and adding plastic Cadian special weapons. What made these models exceptionally perfect was the models left hand that was under the cloak and with the special weapon covering the so much of the model, she looked like she had good hold of the weapon even indeed we cant see her hand on the weapon itself. Head-swapping also proved to be a really simple and good way to give the one-pose-models a totally new look. 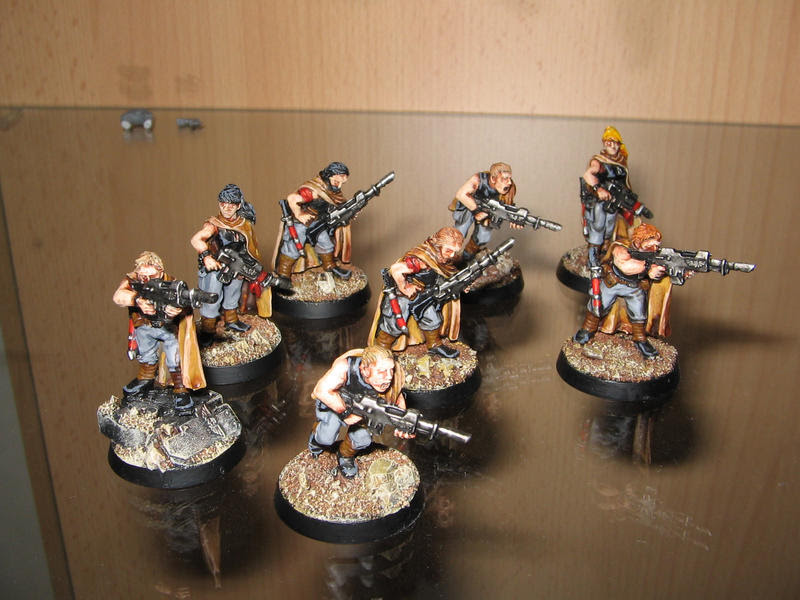 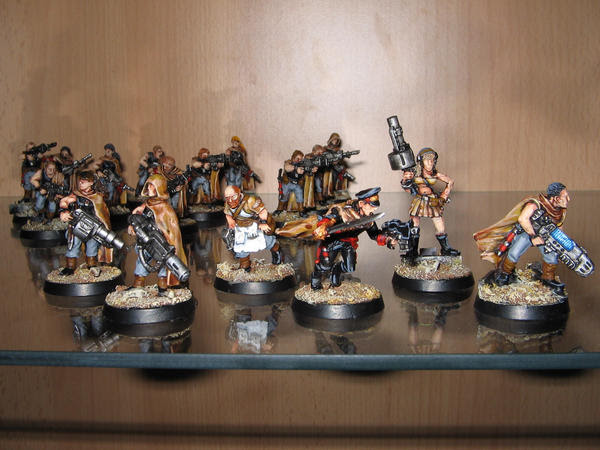 The firsts models proved to be excellent, I could see that my painting skills where gotten better since the days of my Mordian army. 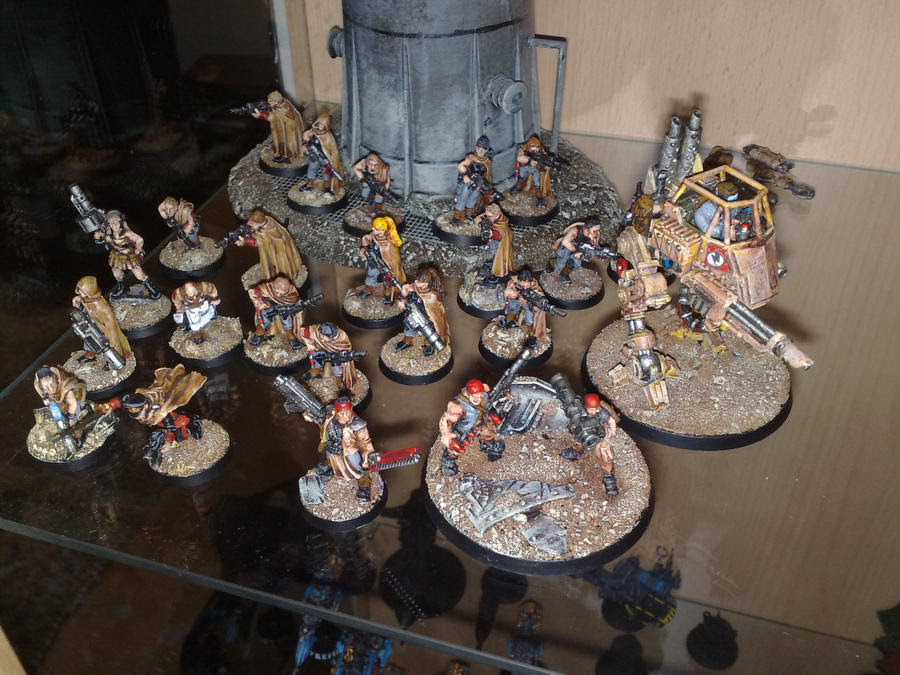 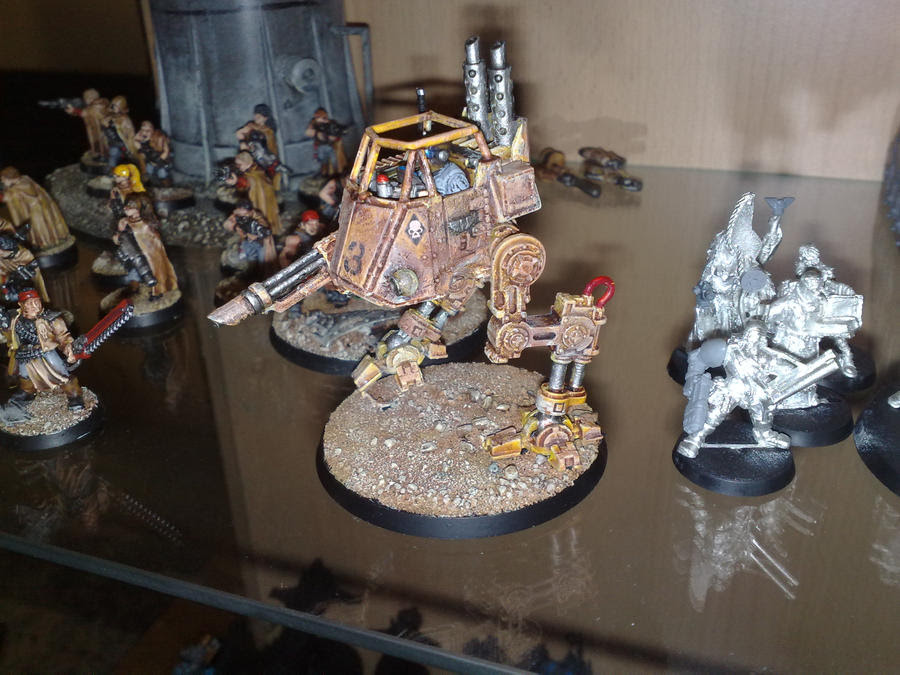 My army was coming on nicely, the weathering on the Sentinel came together better than I had hoped and the heavy weapon teams started to multiply. Next inline was the tanks, sadly they weren't such a success like the rest of the army so far.

During the construction of this army the "dipping" method had became popular thing and I tough it would be perfect for making my guard tanks look dirty and fit well with the desert look of the rest of the army. Sadly my skills where poor with the varnish and in  my humble opinion, ruined the look that I was after with rest of the army.

I was in a hurry with the tanks and so I decided to continue with the dipping, trying to get the tanks to look good and to look the same with the theme. I wanted to get the army ready for 2011 Ropecon and on the very last night before the tournament I put on the static grass on the all the bases of the army's models. 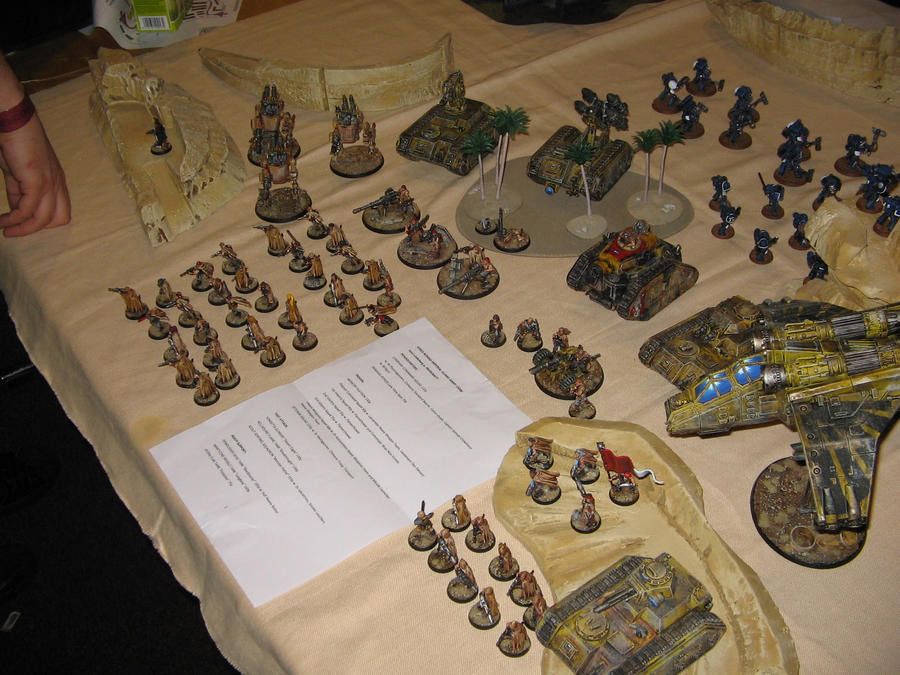 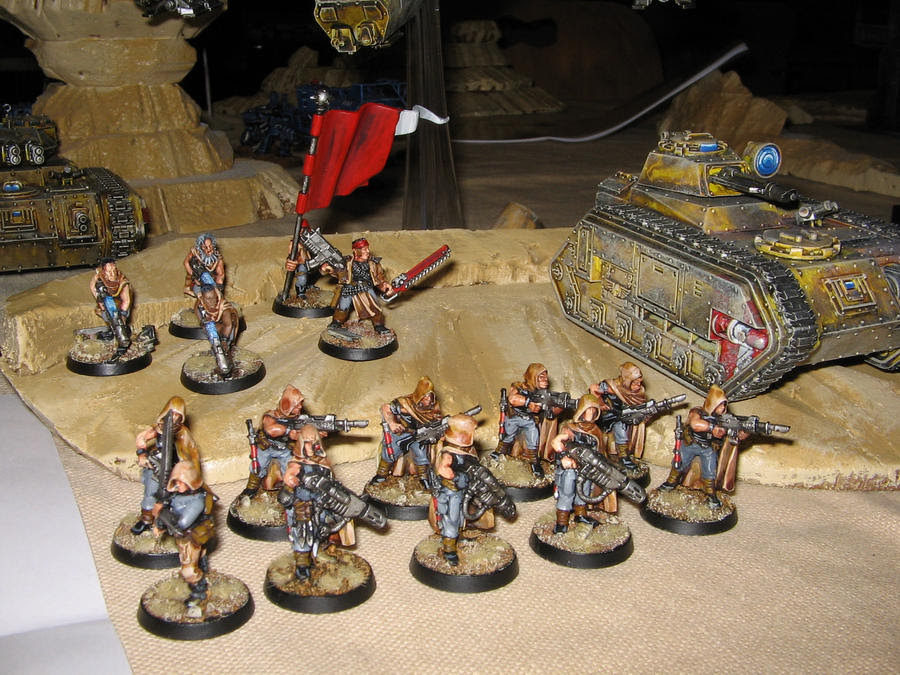 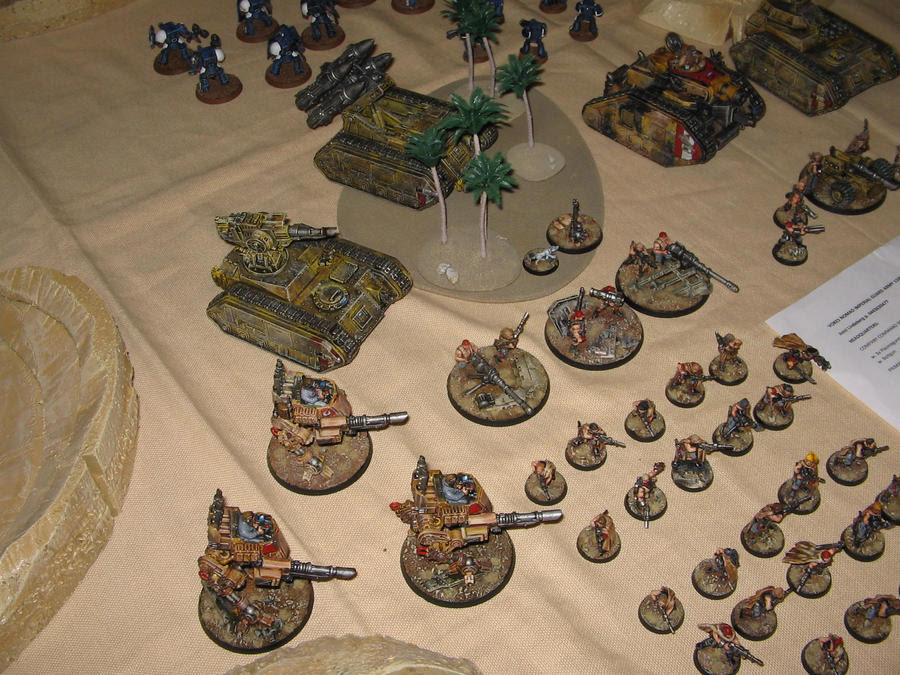 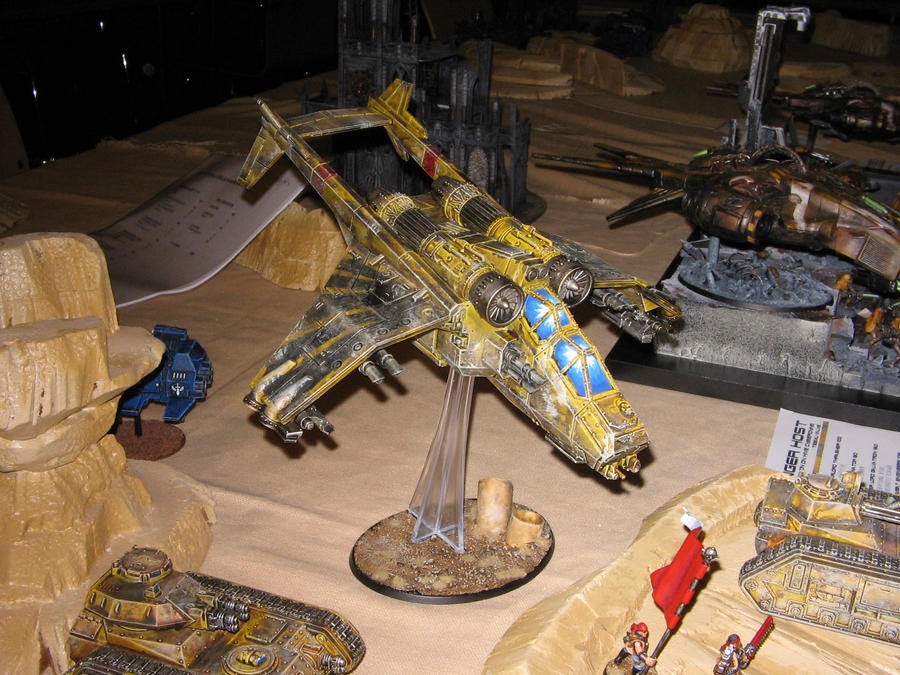 Even despite my own thoughts for the success of my army's overall look I did well. I won the Best Painted Army title once again.

What to do next? Well my very first guard army is in the paint removal process but I think I will savor them for maybe a Armies on Parade contest. But, the worst part of having full metallic infantry is that when you drop them they will chip a piece of your heart as well a piece of that paint job that you have done with hard work. So that in mind I would like to do a tournament army with using only plastic kits. More of that later.

I am an old school veteran of the Warhammer 40k. I have 3 different Imperial Guard armies, first of them going back to 1999 during the 3rd edition of the Warhammer 40k. I collected an impressive full infantry army made from the old classic metallic Cadians, sadly the paint job was that of an teenager and I soon desidet to make an new army, better than my old guard army. This was at the time of the first City Fight codex and I had learned new painting skills. I had used all of my money from my summer job to buy all the models I needed to make my self a Mordian army for the city fight theme.

This army project was my first real sweat-and-blood project and payed off when I won the coveted Best Painted Army title in the 2009 Ropecon, the biggest role playing convention in Finland. I was very pleased and I wanted to start a new army project.